BEARS IN OUR CAMPSITE!

A black bear sow and three cubs entered our campsite in Many Glacier Campground early one morning. To say we were a bit surprised would be an understatement. Fortunately, neither the bears or our family were hurt and all turned out well. What an experience!

There’s a Bear Right There…

Natalie and I had just emerged from the tent. It was chilly and I had just pulled the stove out to boil water for coffee while she went to the restroom. Still groggy and operating on auto-pilot, I was filling one of our water bags at the spigot next to our campsite when a truck slowly drove by and a woman calmly said, “there’s a bear right there”. I looked up to see her pointing to the opening behind our campsite. She didn’t exclaim it or even raise her voice – it was as if this was normal occurrence – she simply stated it as a matter of fact as she drove by.

I looked in the direction she had been pointing to see a furry brown mass moving slowly through the berry shrubs.  It took but a split second to recognize that it was a bear and I saw that it had at least one cub!  Without hesitation, I stopped filling the water bag and walked slowly towards the tent to wake the kids and grab bear spray.  Malia was already awake in the tent so I told her to get everyone up, grab a bear spray, and get to the van – now!

Nat came back from the restroom and helped round up the kids and get them to the van. I grabbed my camera and positioned myself next to the van and started snapping some photos. My adrenaline was pumping! As I began maneuvering to get a better glimpse of the bears, I realized that there wasn’t just one cub – there were THREE CUBS! All I could think about was how many times I had heard that the most dangerous bear is a female protecting her cubs.

I began repeatedly saying, “Hey Bear”, to ensure that they knew we were there and I was prepared to discharge my bear spray if they got too close to the van. Throughout this event, it felt like time was slowing down and my senses were on hyper-alert. I tried to keep track of where they were at all times while simultaneously snapping photos. The mother bear was easy to spot, due to her size, but the cubs seems to dive in and out of view in the huckleberries. They would pop up and then disappear only to pop up a few seconds later in a different spot.

They’re in the Campsite!

Slowly, the bears meandered towards our campsite. They were showing no signs of aggression or defensiveness, which was encouraging but I was well aware of the fact that the female could change her disposition at any time.

The cubs slowly and cautiously approached the campsite and entered. One of the cubs reared up on it’s hind legs and pawed at one of our hammocks – I remember thinking, “please don’t eat the hammock”… They moved around the back of the site, sniffing and gently pawing at the table and chairs, then slowly moved back into the berries. I’m happy this didn’t happen 10 minutes later when we would have had our food out – I would have been forced to spray them.

Our campground neighbors had alerted the campground hosts that there was a bear in the campground and they contacted the Rangers. Within a few minutes, two trucks showed up with a few park rangers that are trained to deal with this type of close encounter situation. Without hesitation, they approached the bears with shotguns in hand and began hazing them with loud shouts and the repeated sounds of reloading of their shotguns.

As the rangers moved in, the adult female sow ran out of sight but all three bear cubs scampered up trees behind our campsite. This was a problem because the female will keep coming back to get the cubs and not leave the area. Due to the unpredictability of the situation and the fact that they weren’t sure where the female had run off to, they asked us and our neighbors to get into the van and drive to a different part of the campground. We dove over to my parents’ campsite just around the corner and told them what had just happened.

NOTE: Interestingly, they reload the guns repeatedly because most or many of the bears that come into the campgrounds have been there before and associate that reloading sound with hazing.

After about 10 minutes, we went back to our campsite and found the Rangers standing next to it. Curious about the outcome of the encounter, I approached and explained that the bears did not get into any food or other items and shared the photos that we took. They expressed concern over this encounter since this sow and three cubs had entered the campground a number of times in the previous weeks. They noted that this would have been a more difficult situation if the bears had gotten into any food or acted aggressively towards anyone – that they may have had to terminate them.

The Rangers ended up spending some time with us and sharing stories about other encounters, (including the one that had closed Many Glacier to tent campers a few weeks previous), and the risks and challenges of managing bears in the park. It was incredibly interesting and informative and we appreciated them taking the time to do so.

It turns out that they had backed away from the area around the cubs and waited for the Mother to return. When she did, the cubs came down from the trees and they were able to haze the bears by making noise and shooting bean bags into their hind quarters via their shotguns. The bears then fled into the area on the other side of Swiftcurrent Creek.

By the time the Rangers left, a small group of us had gathered and were listening in – some not even aware that the bears had been there since they were still sleeping. We filled them in and shared the photos I had taken – many of them couldn’t believe it – and I don’t blame them.

To say it was an exciting morning would be an understatement. We had already come to the consensus that Many Glacier Campground was our favorite campground that we had ever been to but what could make it even more memorable? I know – bears in our campsite!

Seriously though, it was beyond remarkable. Nobody was hurt, we saw bears, and got some educational knowledge from Rangers. What could possibly top that?

Video of the Bear Encounter

Our oldest, Malia, had the presence of mind to pull out her iPhone and video the encounter. It’s a bit long (5 minutes) but it does a good job of communicating the excitement and adrenaline of the encounter. Give it a look if you are curious… 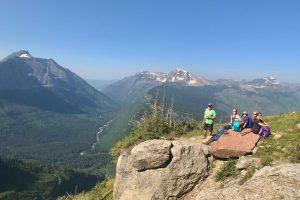 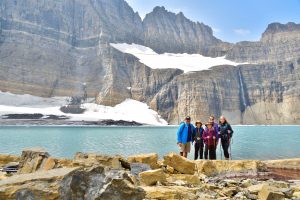 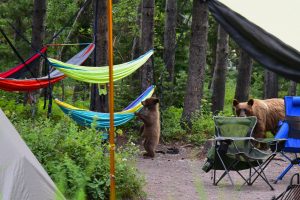 Bears In Our Campsite At Glacier National Park! 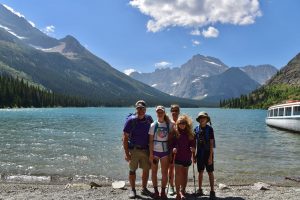 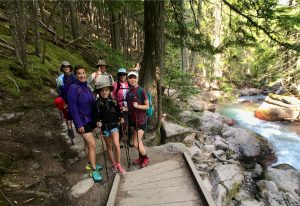 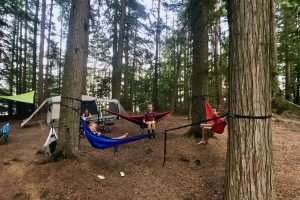