Avalanche Lake Trail is located 5.5 miles east of the Lake McDonald Lodge, next to Avalanche Campground, along the Going to the Sun Road.  As its namesake implies, it leads to Avalanche Lake and it is accessed via the Trail of Cedars trailhead/trail.

Based on everything we had read prior to the trip, we knew that parking is very limited at all trailheads and Visitor Center locations.  I had been following Glacier’s official NPS Twitter account where they would update parking lot fill times and noted that Avalanche parking would usually fill by 10:00 AM or so.  Knowing this, we estimated conservatively that it would take us a half hour to get there from Fish Creek Campground so we planned on leaving at 9:15.

We ended up not getting out of the campsite until around 9:30 and rolled into Avalanche just before 10:00 to find the parking lot full. I drove past the lot, turned around, and drove back through.  I noticed that many cars were pulling into the Avalanche Picnic Area, which is on the other side of the Going to the Sun Road from Avalanche Campground.   I also saw that there were several roads within the picnic area and almost all of the cars were going on the road that went to the right so I went on the road that went to the left.  I drove past a sign that said something like, “RV Turn Around Loop”, and found one last spot next to a picnic table.  Lucky.

The bottom line, get there early to avoid the stress of looking for a spot or take the free shuttle from Apgar (or other designated pickup spot).

The trailhead for the Avalanche Lake Trail as listed on the Glacier National Park website says that it starts out of the Avalanche Picnic area but the official maps don’t show that and signage can be confusing.  We didn’t notice any obvious signs indicating where to start for Avalanche Lake (but we may have overlooked them).

The trail is an offshoot of the Trail of Cedars, which is an easy, flat loop that takes you through many old-growth cedars and hemlocks.  The trail is partially boardwalk and has a number of informational signs about the flora and fauna that can be found along the trail.  It crosses Avalanche Creek in two places and offers some nice views of the water as it passes over rocks and ledges.

The spur to Avalanche Lake is at the midpoint of the Trail of Cedars loop, just after you cross the bridge spanning Avalanche Creek (if you are coming from the east, as we did).  It starts immediately up a short incline over large granite boulders and parallels Avalanche Creek, giving you some nice views.

We continued on the trail, which is well marked and heavily used.  There were a lot of people on this trail but it is wide enough to allow for easy passing and we didn’t experience but a few backups that were quickly cleared.

As we ventured on, the trail continued to gain elevation at a slight grade with some occasional short steeper inclines – but nothing tough or challenging.  The path worked its way along the slope of the hill leading down to the creek and the trees were numerous and dense, offering limited views of the mountains around us, which made any unobscured opening feel visually impressive.

After about an hour of hiking, we came onto Avalanche Lake.  As you emerge from the densely forested trail, you are greeted by what feels like a massive opening of light, water, and mountains – it is really impressive!  Unfortunately, the wildfire smoke that had blown in from fires in CA, combined with the angle of the sun, was diffusing the sunlight in the valley and made it tough to see the waterfalls in the far end of the valley that Avalanche Lake is known for.  We could see them but they visually blended into the hazy grey and were tough to capture in an image.  Nonetheless, it was a beautiful sight.

The beach area was packed with a lot of people. As we dipped our feet into the water – cold! – and sat down on the rocks for a bit, we noticed a smaller beach on the far end of the lake with far fewer people on it.  We decided to make our way that direction and get the view from that area.

The trail continues on along the lake but your view is once again obscured by dense forest and growth.  As our angle of view of the lake changed, we immediately began to notice that the color of the lake had also changed from the crystal clear water we saw at the beach, to a vibrant deep green/blue.  Malia even exclaimed, “Whoa, look at the water!”.

We came onto the beach at the end of the trail on the far end of the lake and were presented with an even more impressive view than the first beach.  The sun was now behind us, which made the colors of the water, forest, and surrounding mountains pop.  It was still hazy but, compared to the other side of the lake, it felt like Mother Nature had just removed the screen we had been looking through.

We sat down on the beach and had a Clif Bar and soaked in the view.  There were noticeably fewer people on this end of the lake, which we liked but I felt bad for those that didn’t come this far because the light/view on this end was so much better.  I think that the opposite is probably true later in the day as the sun’s angle moves and comes from the west, which would be more behind you if at the initial beach – something to consider with regards to your timing if you what photos.

After relaxing for a half hour or so, we gathered our things and began the hike back.  As we were leaving, we heard a loud, “Whoop!”, as a fellow hiker jumped into the frigid lake.

This was our first true hike in Glacier National Park, and in retrospect, it was a great way to get our family in the mode for the more strenuous hikes we had planned on the trip.  By our standards, the hike was no more difficult than many of the shorter bluff land hikes we do back home in the Driftless Area of Wisconsin, even with the added elevation.  The trail is very well marked, it’s wide, and very well used.  By the time we got back to the car, nothing had changed with the parking situation, except the there were now even more cars slowly driving by and circling as they looked for someone to pull out.

Bears In Our Campsite At Glacier National Park! 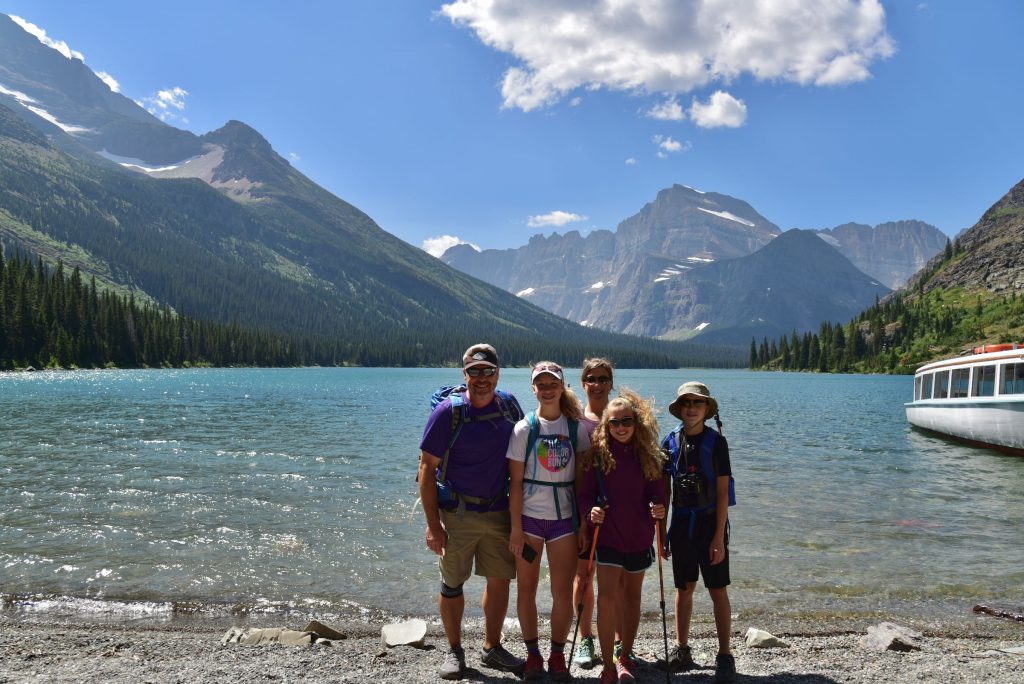